Life at the Jay Ward studio, as seen by Bill Scott, part 3

Jay Ward and Bill Scott had what could be politely called a "challenging relationship" with General Mills' agency, Dancer-Fitzgerald-Samples.  Not only had the agency insisted on a ridiculously low budget from the outset (which had necessitated setting up production in Mexico) but key agency personnel were also the primary investors in the that same Mexican studio.  Keeping costs low ensured that those investors made a return on their investment, which in turn affected the quality of the studio's output.  The one person at D-F-S who seemed to be the consistent target of Bill and Jay's ire was agency exec, Gordon Johnson, pictured below in the first two cartoons. The the man holding the sign is Peter Piech, president of Producer's Associates of Television, who often found himself caught between the two adversaries. 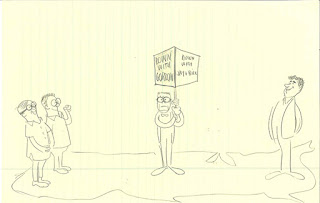 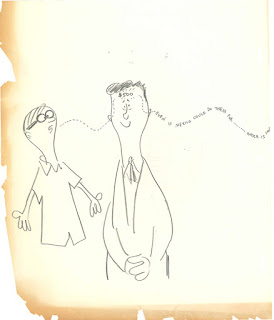 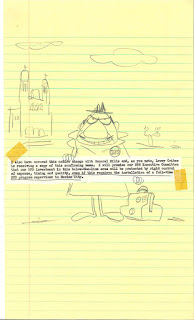 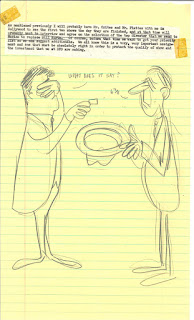 Several others in this series can be seen in The Art of Jay Ward Productions.  To read about more zany agency antics, check out Keith Scott's history of the Jay Ward studio, The Moose That Roared.  Anyone running a business today will recognize the situations depicted in the cartoons below; apparently some things never change.  (My apologies for the missing part of the third scan.) 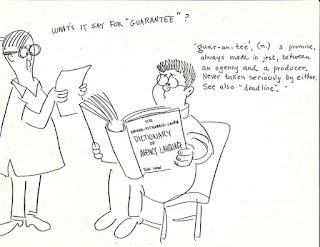 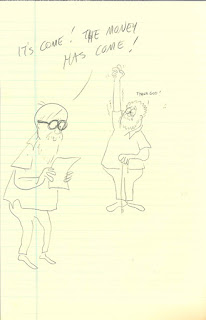 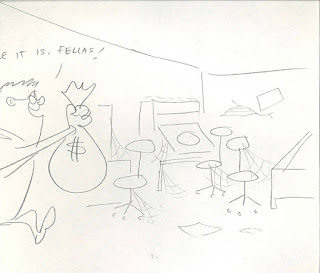 Next week, dealing with NBC.
Posted by Darrell at 9:30 AM