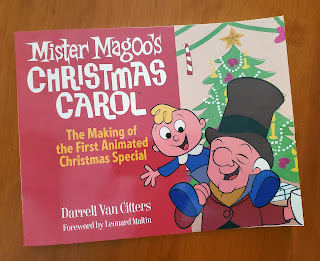 A little crossover promotion for my first book.  After 8 years of being out of print, I'm pleased to announce that my book on the making of the first animated Christmas special is back in print!  But wait, there's more!  This edition is softcover but instead of reprinting the 2009 book, this is a reprint of the 2012 deluxe slipcased 50th anniversary edition, which had 48 more pages than the original and over 200 more images.  This edition has the added bonus of 2 more pages with 6 more rare photos from the song recording session, photos that were uncovered years after the deluxe edition had sold out.

To sum up, this printing has 180 pages vs the original edition's 128 pages and 439 images vs 232 in the original.  Because of the limited print run of the deluxe version (only 250 copies), very few people have seen the extra material.  If you only own the first printing, you owe it to yourself to get this version, it's the most complete edition ever printed.  Available online only from the usual suspects like Amazon and Barnes & Noble.