This week, Frank Hursh takes up where he left off, describing what it was like to be in the thick of production on the Jay Ward shows in Mexico:


As a painter, I had been using oil paints, but in Mexico City I met José Luis Gutiérrez, the inventor of acrylic paints and the owner of the Politec Paint Company. The great Mexican muralists – Siqueiros and Orozco -had been using acrylic paints for their murals – being exposed to the elements, this was an excellent paint because the color was fast, and it resisted water, heat, and wind damage.  José Luis had told me that I could even paint with it on glass. So, I had started to use acrylic paints in my personal artwork, a long time before it ever got to the U.S.

At Gamma, when we had trouble importing the Cartoon Color paints, I suggested that we switch to acrylic. Even Politec Paints were expensive at the time, so we eventually used ICI acrylic paints, and Sherwin Williams Super Kem-Tone, which was an excellent acrylic paint for the exterior of homes. They would mix up special batches of colors just for us.  In the long run, it was a good option: today the Cartoon Colors have peeled off a lot of cels, but the acrylic paint still adheres well.  (In addition to the paint, there were other art supply issues at Gamma involving both cels and ink; for further detail, read pages 52-53 in The Art of Jay Ward Productions where you can also see images of the studio's exterior.)  Note the proprietary color call outs in the color model cel below; American call outs identified the color followed by a number indicating the shade or tint.

Above, Frank Hursh with his background crew surrounded by dozens of background paintings for various Jay Ward shows.  On the table, cans of latex paint used to paint both the backgrounds and cels.  Frank has attempted to name as many people as possible although in many cases, his recall is limited to their nicknames.

Of his crew, Frank recalls:

“Mau Mau” Arrellano was a body builder, Jesús Chucho was a television actor and did some promotional advertising for TV, Guillermo Aguilar, my assistant later became a medical doctor.  Raúl Vilchis later became the only painter out of the group (besides Frank).  “Tío” (which means “Uncle”) was the oldest guy working in the background department, and was so named because he was the uncle of someone at Gamma although I can´t remember who.  Nacho (short for Ignacio) Brambilla was a football player and later became a director of television programs.

The top two photos were staged by a Life magazine photographer for a proposed story on the Gamma studio which never materialized; Frank is sitting at someone else's desk and the backgrounds were pinned up around him for the photo.  Below, photos of how the background department really looked at Gamma:


During the writing process on The Art of Jay Ward Productions, I put out an all points bulletin on the Internet looking for a few artists who had either worked directly for Jay Ward in Hollywood or for Val-Mar/Gamma Productions in Mexico, the subcontractor for all animation production on the Jay Ward series.  One of those artists was Frank Hursh, an American painter who had headed up the background department at the Mexican studio in the early 1960s, a crucial period in the history of the Ward studio.

Admittedly, my request was a long shot and I had low expectations for any kind of response.  However, while the book was at the printer’s, I received a phone call from Frank’s daughter, Holly, responding to my posting which she had just discovered while searching on the Internet.  She was calling from Mexico with her father standing right next to her.  While it was too late to include any new information or art from Frank, it wasn’t too late for me to ask questions or to find out that his memoirs had been published in a bilingual book in Mexico.  Later I found out that Frank had photos of the personnel and studio from it's heyday along with a few pieces of original art.  It's unlikely there will be a second edition of The Art of Jay Ward Productions so I've decided to highlight Frank Hursh and his time at the Gamma studio with a multi-part blog post.

The most obvious question for me was 'how did an American fine arts painter end up in Mexico working on Rocky and Bullwinkle?'  Here, in Frank's own words, is his story:

I had come to Mexico with two scholarships to study a Master´s Degree in Mural Painting at the Mexico City College (now Universidad de las Américas) and San Carlos, the art school of the National University (Universidad Nacional Autónoma de México). I also started doing some television production and television art, and had become a partner in a company called Telepelículas. I had fallen in love with Mexico, so colorful and vibrant, and soon I left school to work full time. 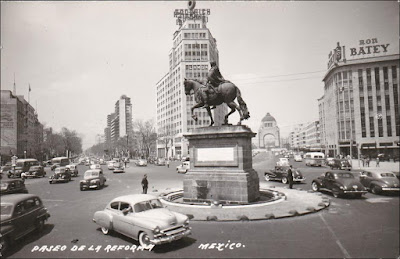 The population of Mexico City was only about 3 million at that time (middle 1950´s). There was not much traffic. There were no stoplights along Paseo de la Reforma, which was such a beautiful boulevard. There were glorietas (roundabouts) and there was a tacit understanding of how traffic was to flow around those. I never saw a car accident along that street. You could walk any place in Mexico City without ever being bothered. It was such a lovely city– everybody seemed to know each other. We did a lot of partying, getting together often to have a drink and some tacos, going to Xochimilco for a ride on the chinampas (flat boats) and lots of mariachi music. We had a good time.

I had met Bud Gourley before, the Operating Administrator in the animation studio (Val-Mar) at that time, and I told him that I was looking for a job.  He asked me if I had had any experience in animation, which I hadn't, so I didn't get the job.  Sometime later, after my wife and I had separated, I rented my house to Harvey Siegel (a veteran of the NY animation industry sent to assist with production), who invited me over to a get-together that he was having with some people from the (Ward) studio in the States. I had painted a picture of a train for my children´s bedroom, and Bill Hurtz (one of Ward's directors) saw it. He said to me “Frank, I don´t have anybody down here to do color. Can you come and give us a hand?” So that´s how I got into animation.

At Gamma, there were 250 – 300 people working at any one time. I had from 8 to 12 people, depending, in my Department.  Guillermo Aguilar was my assistant.  All in all, we did some 18 and a half minutes of limited animation a week. At 12 images per second, that’s about 13,320 images produced in a week! That means layout, backgrounds, inking and painting, photographing! We did quite a lot of work, very quickly.

Sometimes, we did get some crazy things out of layout that changed the style of the backgrounds [that had already been done] for the whole show—and we would be so busy trying to match things up for the animation. One time we got a layout that was completely different from all the others and we had no time to change it. It was a bit crazy. Sometimes, because of rushing around, things were not done in the same style, which was visibly noticeable when it was aired. It gave the show a quirky feel, a bit off the wall. I think that was one of the things, along with the dialogue, that helped the appeal of Rocky & Bullwinkle.


Next week, more rare photos and art, along with part 2 of Frank's life at the Gamma studio in Mexico City.
Posted by Darrell at 10:00 AM 3 comments: