Jay Ward and the Art of Self-Promotion, part 6

This week, part of the barrage of publicity materials put out by Jay Ward's "Operation Loudmouth," trading cards! 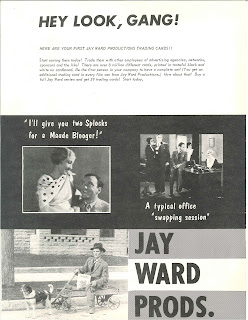 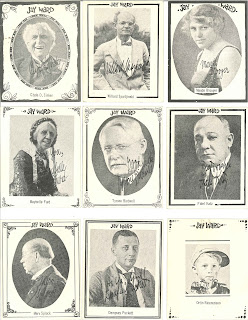 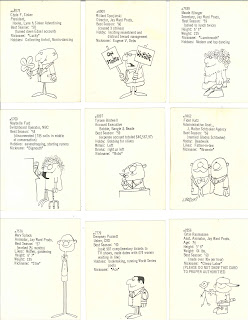 Those are Allan Burns' drawings on the reverse of the card.  Yes, the same Allan Burns who went on to create the format of The Munsters (with partner Chris Hayward), My Mother the Car (again with Hayward) and The Mary Tyler Moore Show (with James Brooks). 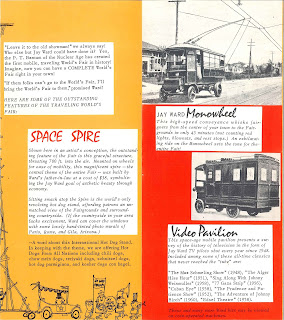 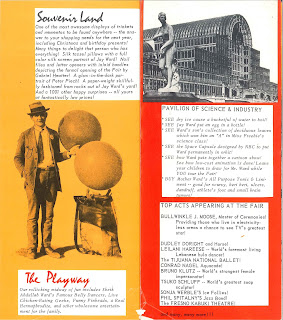 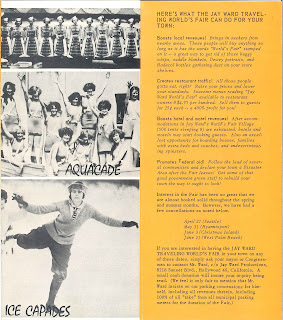 Special thanks to former Ward staffer Art Diamond, who seemed to keep virtually everything produced for "Operation Loudmouth."
Posted by Darrell at 9:30 AM No comments:

The Other Side of Sam Clayberger

One day while chatting with Jay Ward artist Sam Clayberger during the research and art scanning phase of the book, he  ruefully remarked to me that "it looked like I'm going to be remembered more for my animation art than my fine art."  That's a sentiment shared by most animation artists as they are known more for what they put on the screen than what they do on their own time.  Particularly if the art one produced was an integral part of many people's childhoods, as was the case for virtually all the shows and commercials produced by the Jay Ward studio.  Sam was a central part of the studio's output from the very beginning with his work on the Rocky the Flying Squirrel pilot to the last Quaker Oats commercial 25 years later and The Art of Jay Ward Productions features a large selection of Sam's contributions to the studio.  There are also a number of posts on this blog (here, here and here) featuring his work.

In an attempt to bring Sam's fine art paintings to a wider audience, I've posted images of some of his paintings below.  Should you be interested in seeing other examples or purchasing one, very reasonably priced, contact his daughter via his website here.  I also have a few books signed by Sam, available here, but order soon, they're going fast. 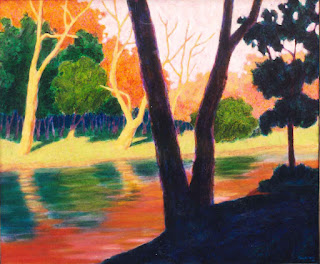 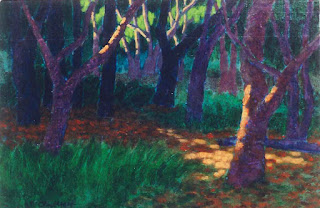 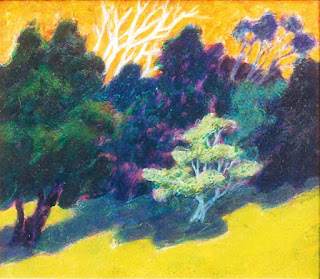 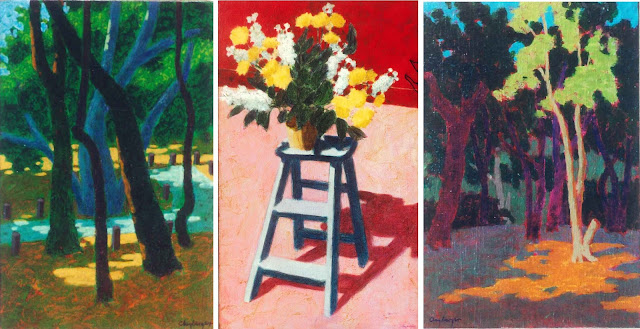 Jay Ward and the Art of Self-Promotion, Part 5

As detailed in Chapter 4 of The Art of Jay Ward Productions, Jay Ward had been burned by what he felt was a lack of promotional effort by ABC on his first series, Rocky and His Friends, so when NBC picked up The Bullwinkle Show for an evening time slot, Ward and his staff went into overdrive to create a blizzard of promotional materials to get maximum attention for the series with a campaign dubbed "Operation Loudmouth."  George Atkins handled the writing and Allan Burns handled the artwork with publicist Howard Brandy providing on the ground tactical support.  The studio generated a lot of ephemera for this campaign and over the next several weeks, I'll be showcasing many rare items, most of which haven't been seen in over half a century.

This week, apparently Jay Ward publicist Howard Brandy was so good at his job, he got an April Fools insert into TV Guide magazine as well as a full fledged article detailing some of the studio's shenanigans.  Following are scans of the issue, cover painting by Sam Clayberger, interior art by Allan Burns.  Bonus points if you can name Bullwinkle's friend in the image below. 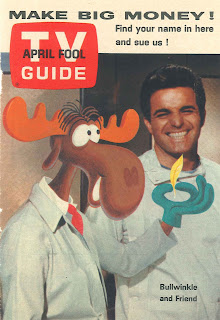 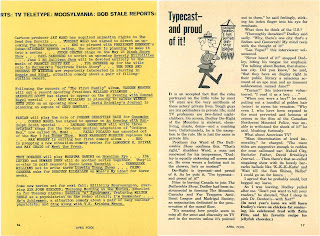 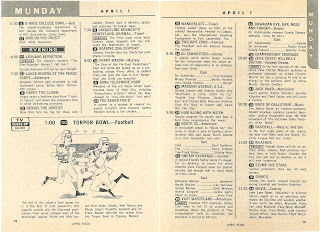 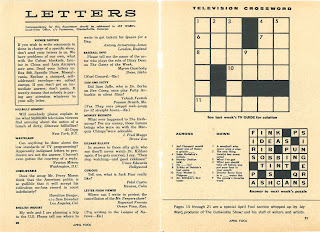 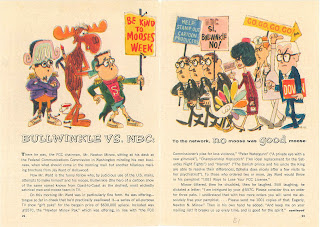 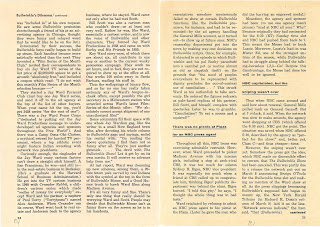 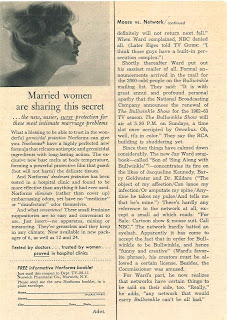 Ever bought an original Rocky or Bullwinkle drawing or cel?  Chances are good that what you bought might not be what you thought it was.  If you've read my book, The Art of Jay Ward, you know that art from the original series, either Rocky and His Friends or The Bullwinkle Show is exceedingly rare, mostly because they were both produced in Mexico City and very little of that art emigrated back to the States.  Below is a very rare example of Rocky & Bullwinkle art produced in Mexico, recently offered at auction by Heritage Auctions: 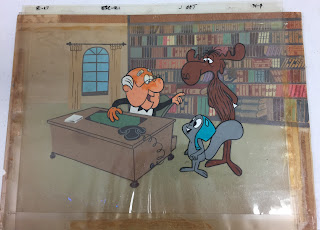 More likely, that cel or drawing you bought was from a TV commercial, either produced contemporaneously with the original series or something more recent.  Below is an example from eBay of a cel from a vintage early 1960s Cheerios commercial signed by director Bill Hurtz, writer/storyboard artist Chris Jenkyns and the late June Foray, voice of Rocky the Flying Squirrel.  Should you wish to purchase this cel, you can buy it here. 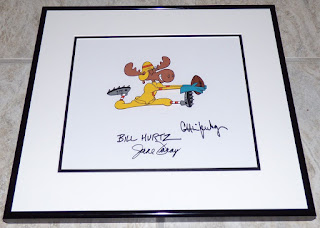 For some time now, more recent drawings and cels of both Rocky and Bullwinkle have been offered for sale and are often misleadingly labeled so that buyers might believe they were buying vintage art; kudos to those dealers who have accurately described what they were selling.  The art in question likely came from a 1986 commercial for Hershey's Kisses.  The commercial can be viewed below:


Almost looks vintage, doesn't it?  If the print were faded, one might almost mistake it for an early 1960s ad. However, it was produced in 1986 at Filmfair, a highly regarded Los Angeles commercial studio, because Jay Ward had stopped producing commercials in-house in 1984.  The spot was notable for several reasons, not the least of which was it was Bill Scott's last performance as Bullwinkle.  Building on that foundation, it was laid out and directed by Sam Cornell, a Jay Ward alum from the George of the Jungle series.  (You can read more about Sam on pages 277 and 305 in The Art of Jay Ward.)  Here, for sale on eBay, is one of Sam's layout drawings from the commercial: 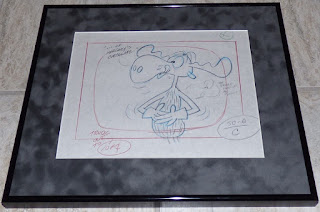 Adding to the spot's luster, it was animated by Chris Buck who had left Disney a couple of years earlier after a 6 year run.  Chris was working freelance for Sam Cornell and Filmfair on commercials during the mid-80s and later returned to Disney several times, serving as a key animator on many of the 80s and 90s hand drawn features and later as co-director of both Tarzan and Disney's mega-hit Frozen.  In between stints at Disney, he directed the TV series, Family Dog and later directed the Sony feature, Surf's Up!

The character models in the Hershey commercial are spot on and, adding to the vintage look, the cels were hand inked.  The image below was slated to be included in The Art of Jay Ward Productions but unfortunately it could not be located before the book went to press.  If you bought art from the above commercial, it might not be vintage but it still has a strong pedigree! 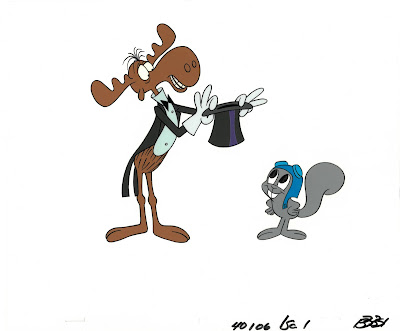