Jay Ward and the art of self-promotion, part 3

Once they began "Operation Loudmouth," Jay Ward and his publicist, Howard Brandy, managed to get Bullwinkle mentioned in places one wouldn't even think of, including a teen magazine.  Here is a recently surfaced item from a 1962 issue of Teen Screen magazine announcing a "Name Bullwinkle Contest."  Writing likely by George Atkins, art by Allan Burns and lettering by Sam Clayberger: 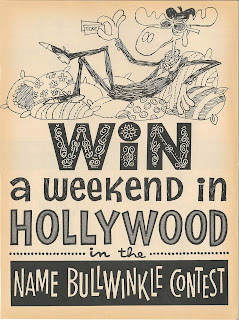 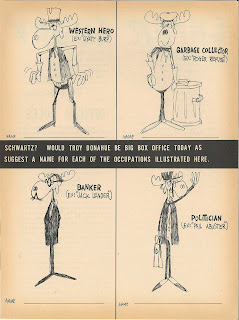 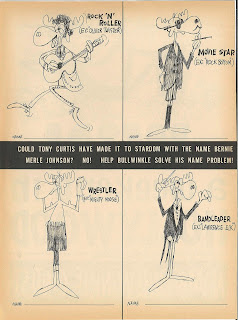 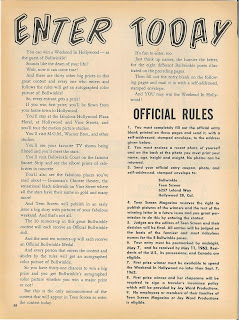 Memorial Day and the animation artists who served

For most Americans, Memorial Day is a day off and the official kickoff of summer.  In a local Los Angeles suburb, it's not even referred to as Memorial Day but "Fiesta Days," whatever that means.  However, in spite of local governments and the media, the day was set aside to remember all those who served their country, often making the ultimate sacrifice.


Many of the artists from animation's so-called Golden Age were not actually in combat during WWII but served in one form or another, usually working for the US Army Signal Corps in the First Motion Picture Unit turning out training films for the various service branches.  There were both East Coast and West Coast units, most of the veterans who worked for Jay Ward served on the West Coast at Fort Roach, Hal Roach's studio facility in Culver City.

The above image features many of the era's brightest stars from many of the different animation studios and full identification of the personnel can be found at here at Mike Barrier's essential animation history website.  More photos and even a short clip of the animation department from the FMPU can be seen at Mark Mayerson's blog here.  Other artists might have worked at the studios on training films for the military while not actually being a member of the service.  Not all of Ward's artists were old enough to have served in the FMPU during WWII and many served after that conflict.

Roll call for Jay Ward's artists (staff, freelancers or subcontractors) who served their country in the US military:

Veterans still with us:

May we always remember those who served.

This list is by no means exhaustive and if anyone knows someone who should be on it, please let me know.
Posted by Darrell at 9:30 AM No comments: 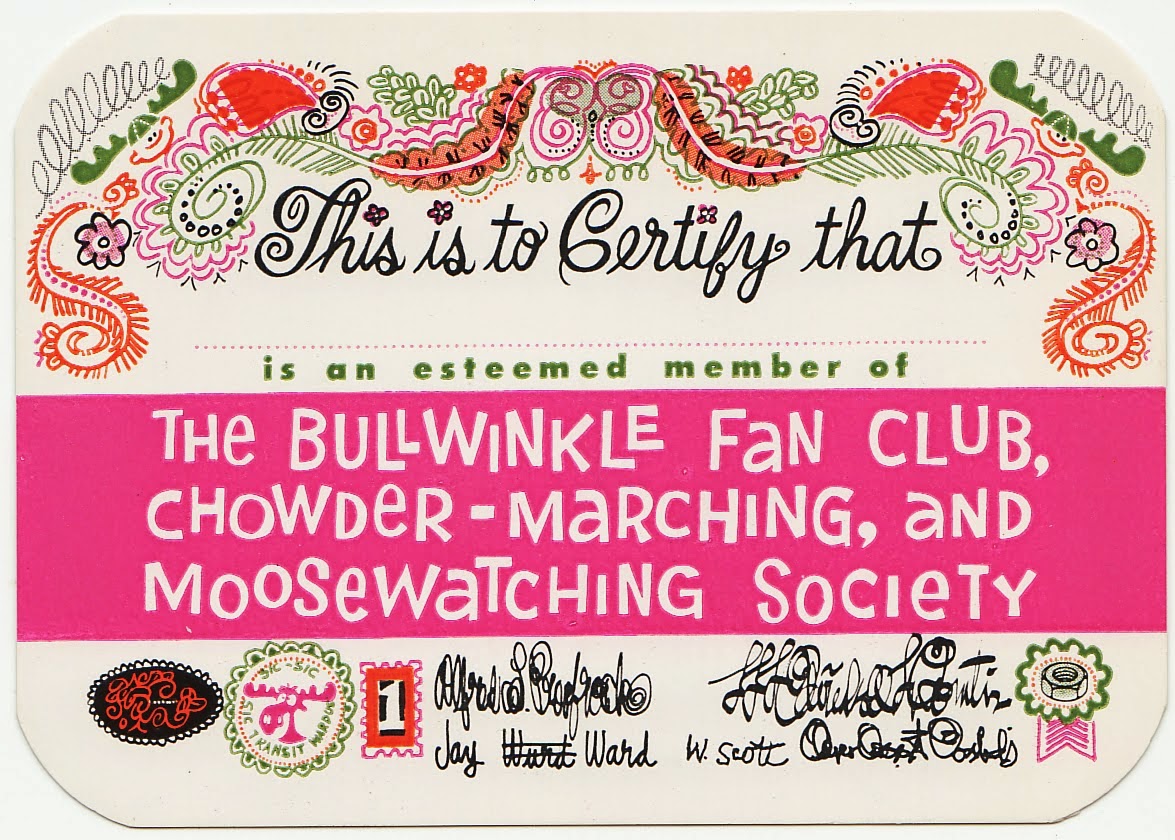 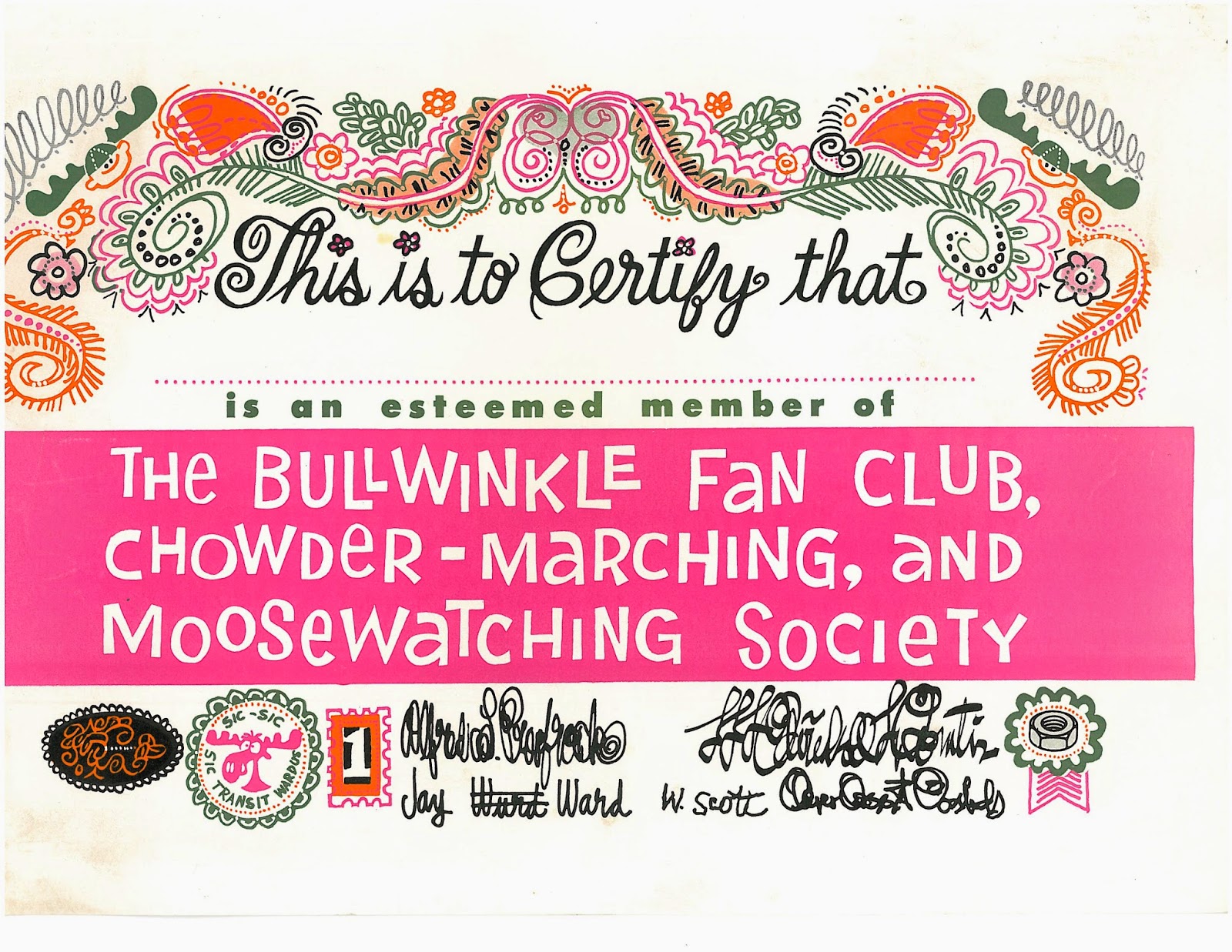 Allan Burns drew the art for these fan club cards which were designed and lettered by Sam Clayberger: 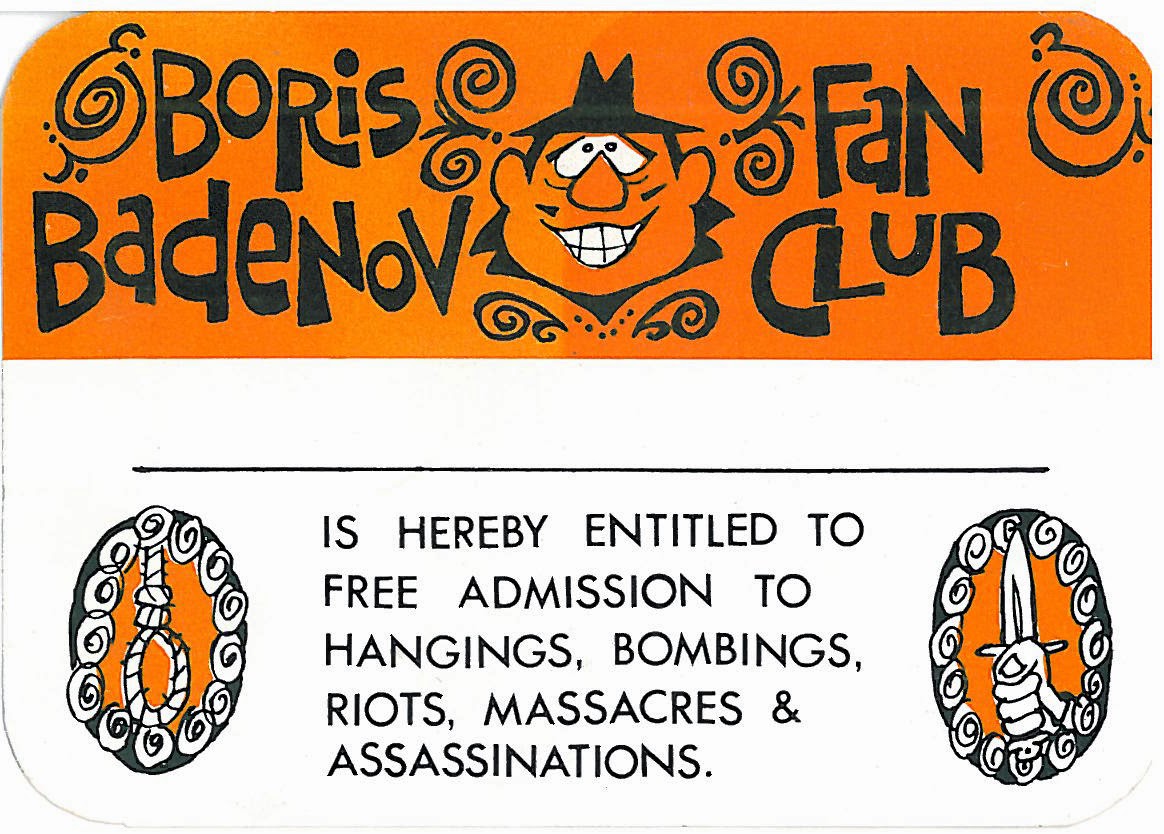 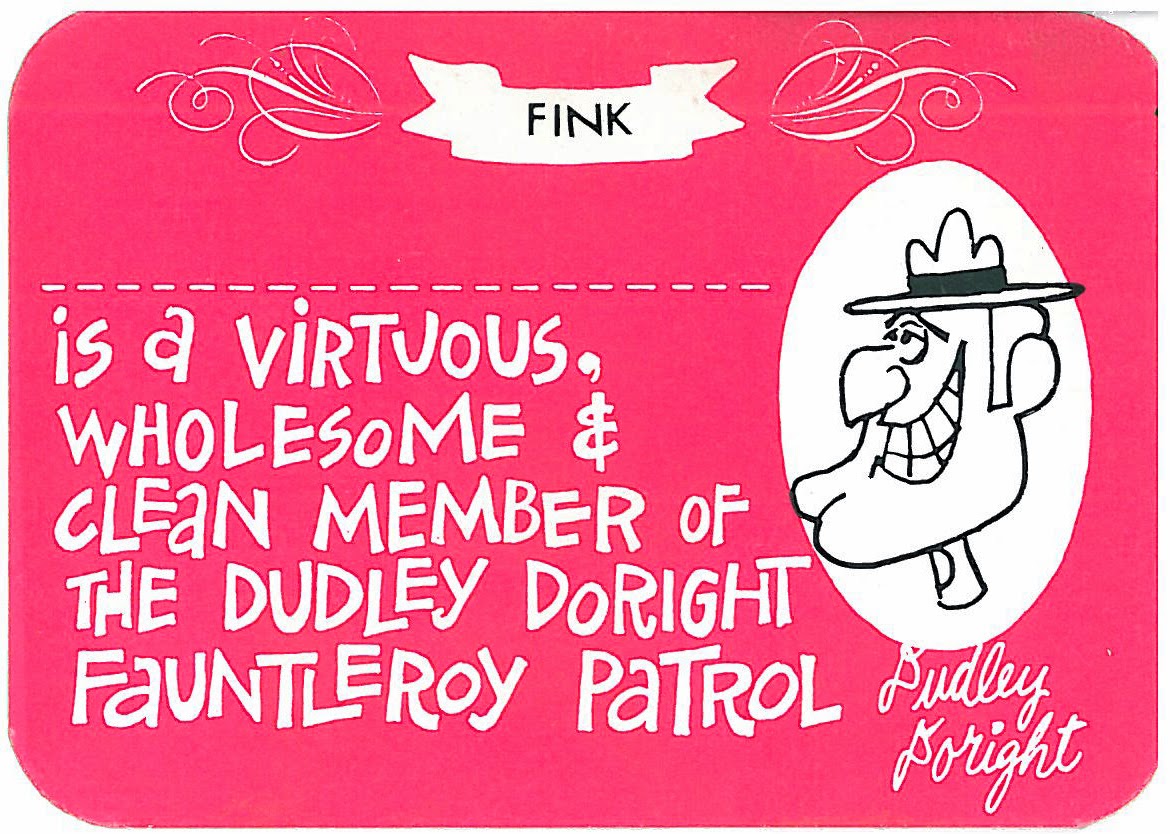 Does anyone still have their original membership cards?

Jay Ward and the art of self-promotion, part 2

Jay Ward staffers George Atkins and Allan Burns continued to churn out promotional material for The Bullwinkle Show, even following up the success of "Sing Along with Bullwinkle" song book with a sequel:


The duo continued to come up with wacky promotions, anything to remind people of the show:

Reusing the same artwork for another campaign except for eliminating the teeth in the character's mouths: 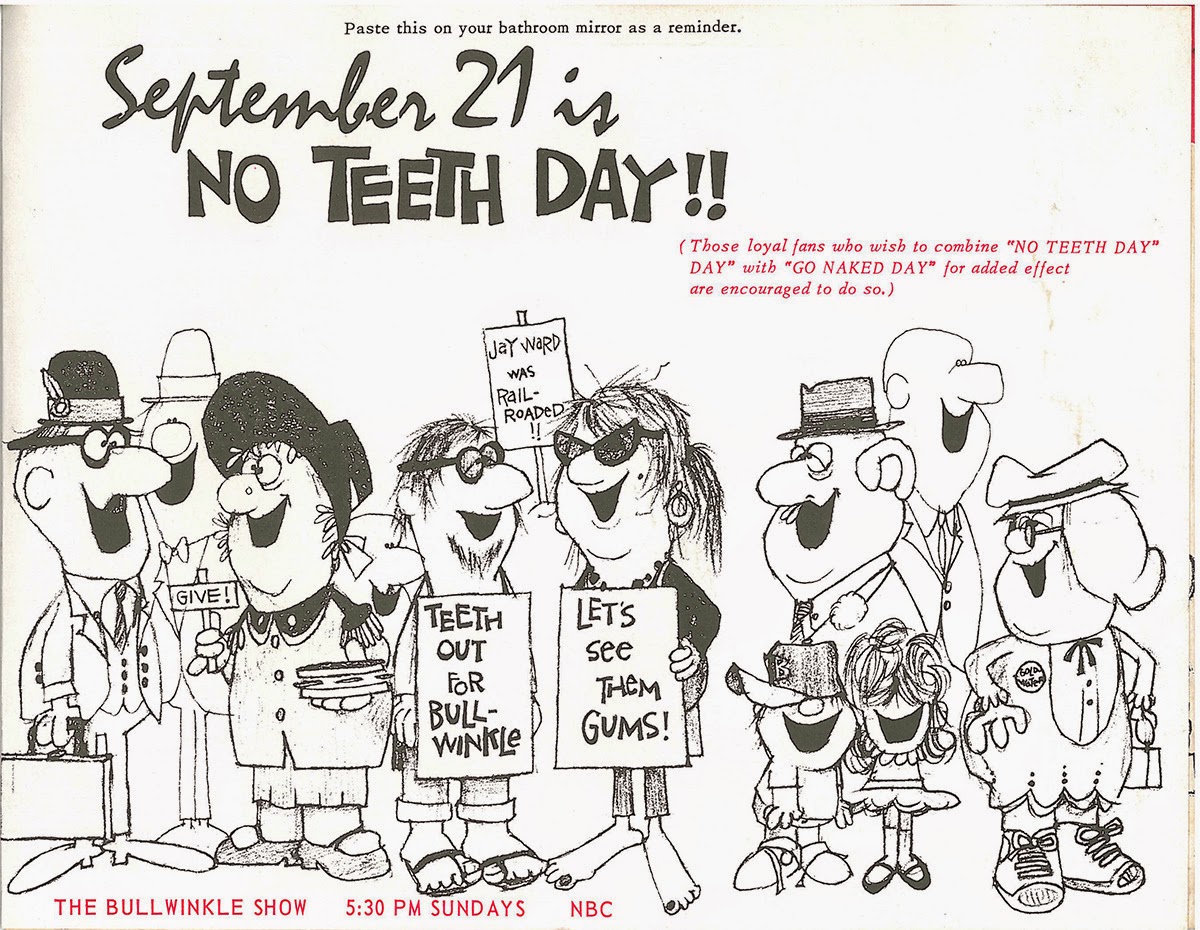 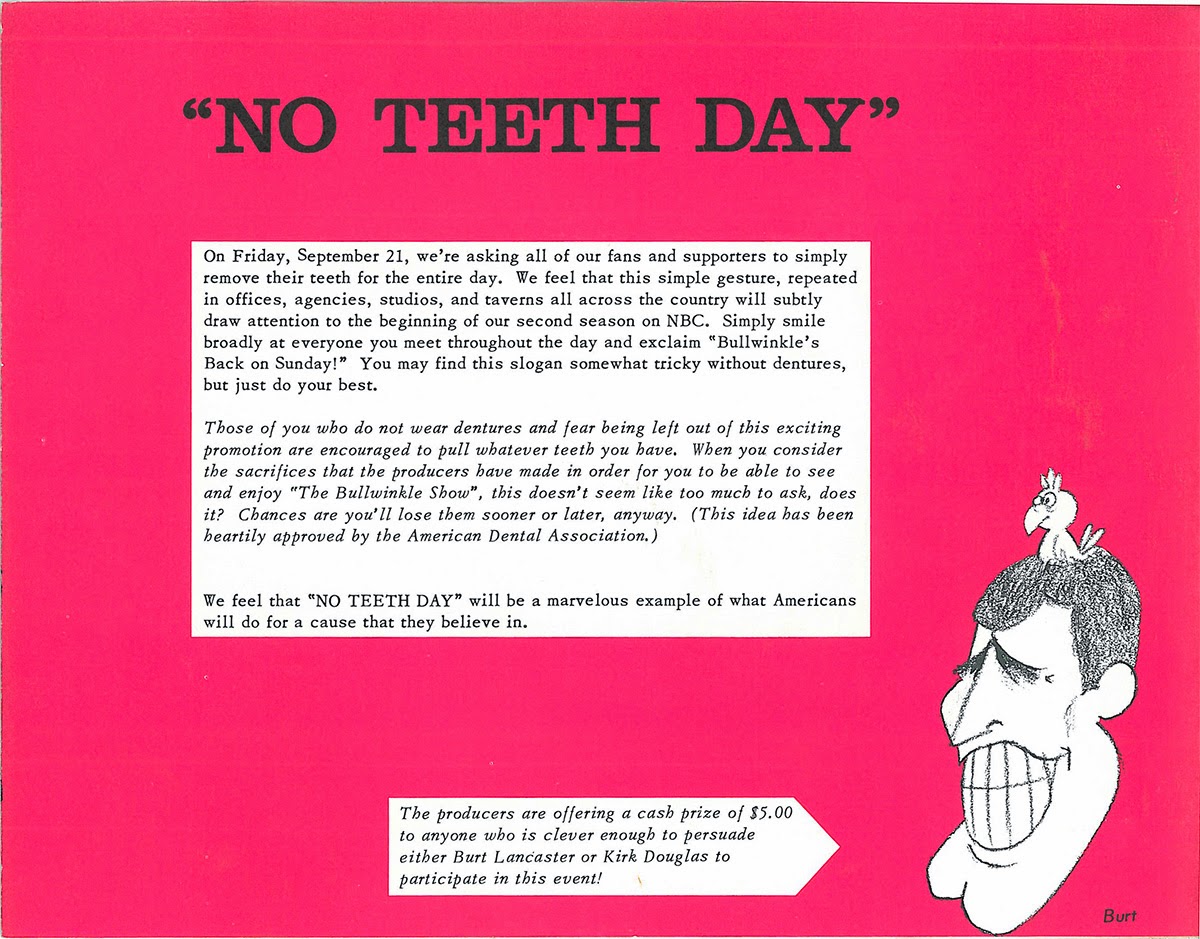 Shortly after the debut of the show in 1961, Bullwinkle was featured in the Macy's Thanksgiving Day Parade as one of the balloons, and on the West Coast Bullwinkle appeared on a float in the 1962 Rose Parade.  Sam Clayberger designed the float, entitled "Columbus Was Wrong,"which featured Bullwinkle navigating a ship off a cubical Earth: 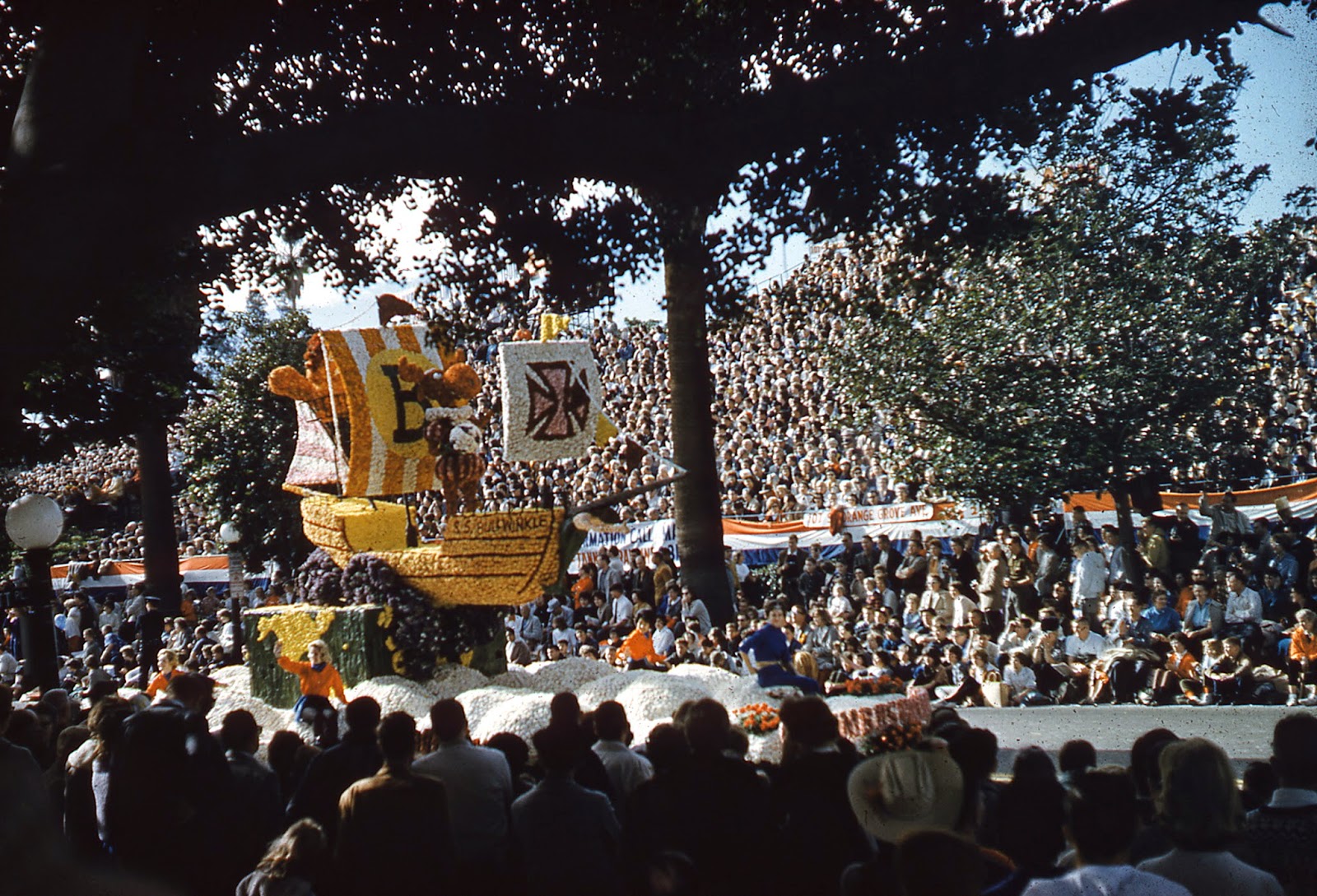 Last but not least, some very cool embossed letterhead for the show, oddly enough in the landscape format: 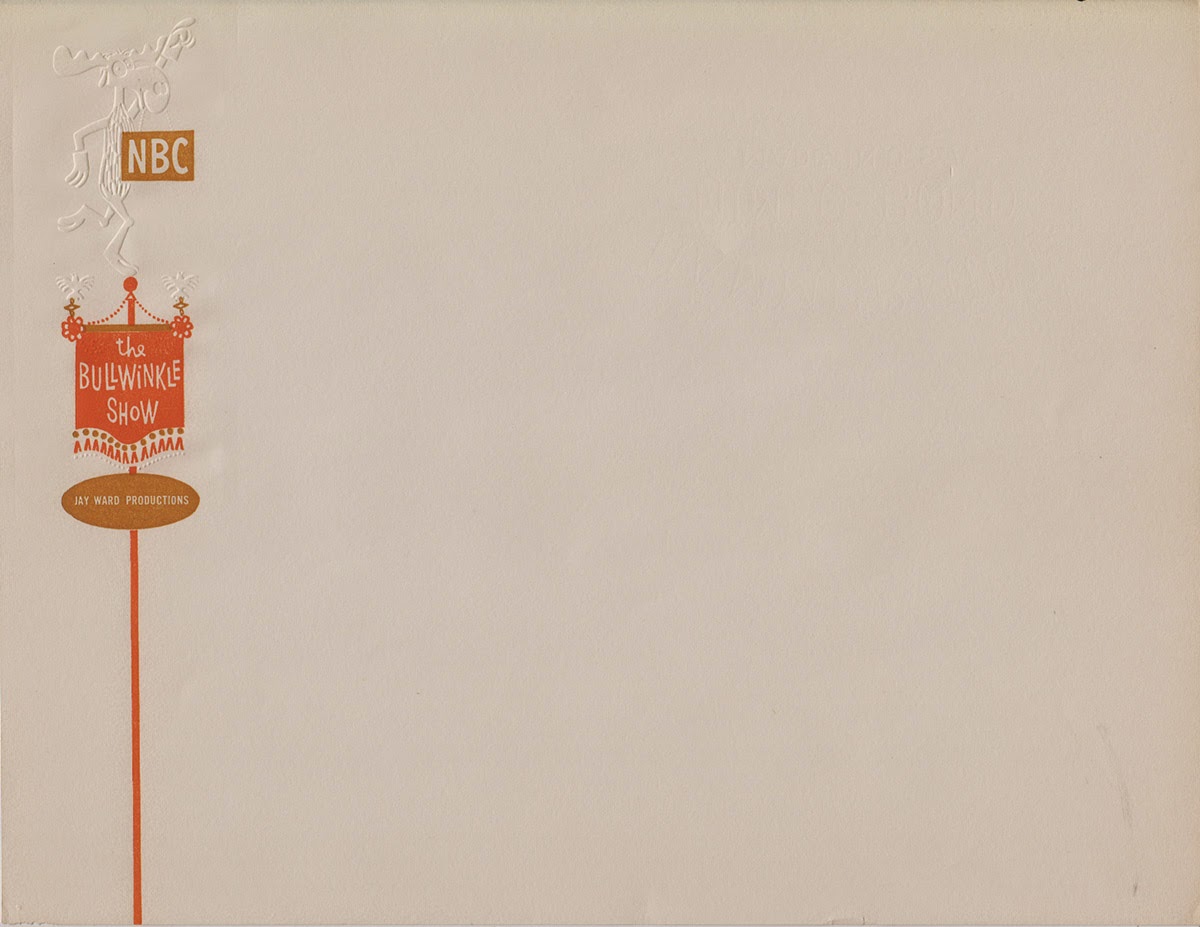 Jay Ward and the art of self-promotion

Jay Ward had been burned by a lack of promotion by ABC on his first series, Rocky and His Friends, so he had little reason to believe that his new show, The Bullwinkle Show, would fare any better on NBC.  Figuring he needed to toot his own horn, he launched "Operation Loudmouth" as a way of making sure the media, and by extension his intended audience, knew about The Bullwinkle Show.  Writer George Atkins and newly hired cartoonist Allan Burns were given the task of generating ideas for promoting the show.

Operation Loudmouth was aptly named as Jay staged several large, over-the-top events and continually bombarded the media with a wide variety of mailings, all with one goal in mind: to make sure everyone knew about about The Bullwinkle Show.  Perhaps his biggest event to help promote the show's debut was the Bullwinkle Block Party, which closed down one lane of busy Sunset Boulevard in Hollywood.  The Bullwinkle statue was unveiled that evening and celebrity guests included LA County Sheriff Peter Pitchess and Jayne Mansfield.  Here's what the invitation looked like: 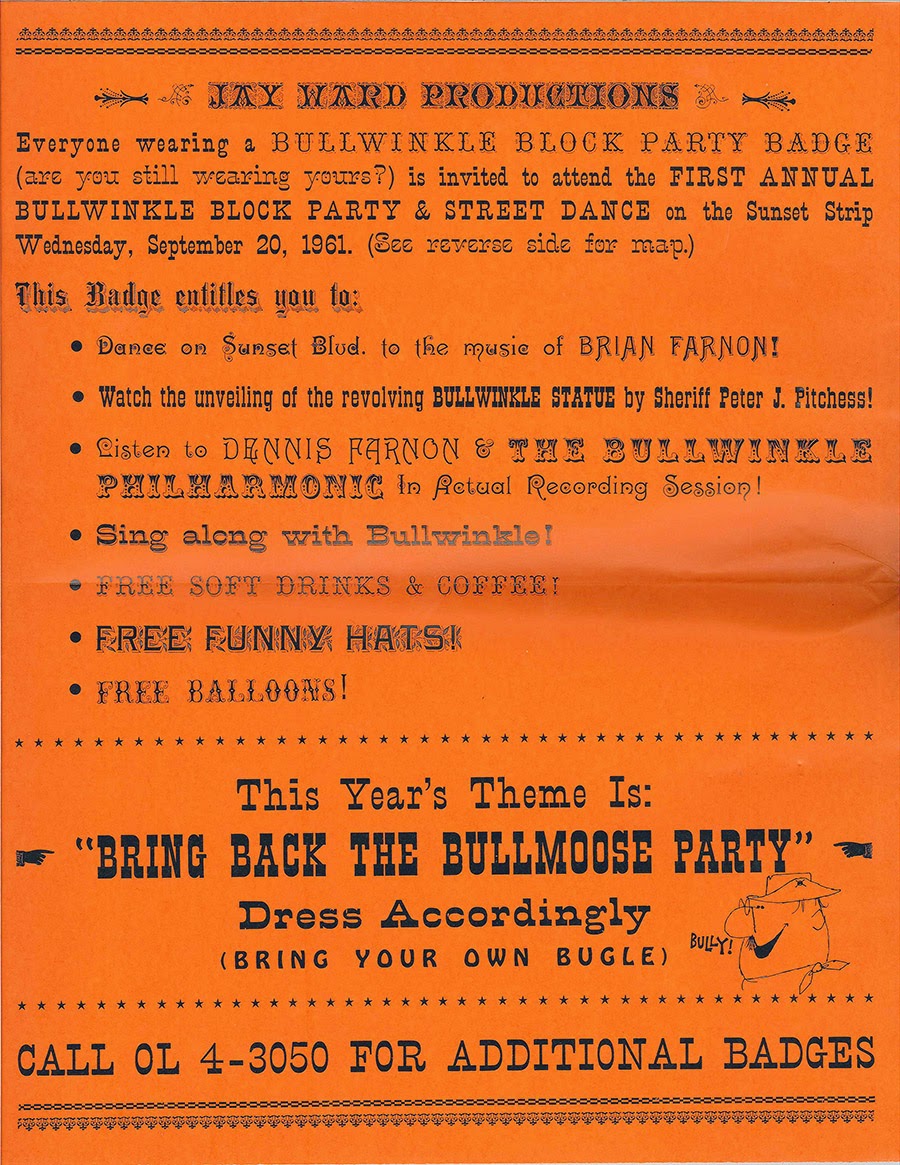 And here are the badges for the event, included with the invitation: 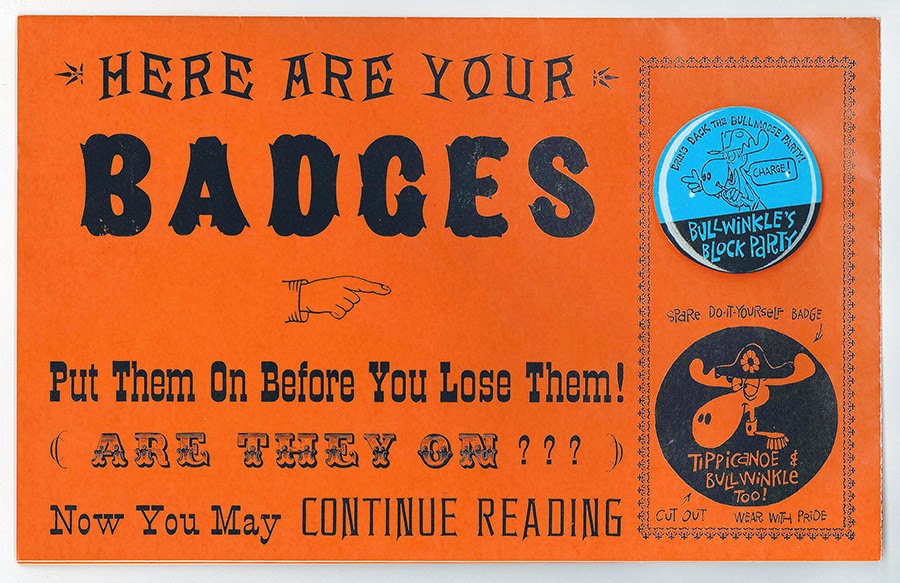 The Bullwinkle Song Book for singing at the event:


A ribbon, poking fun at NBC and their lack of promotion for the series: 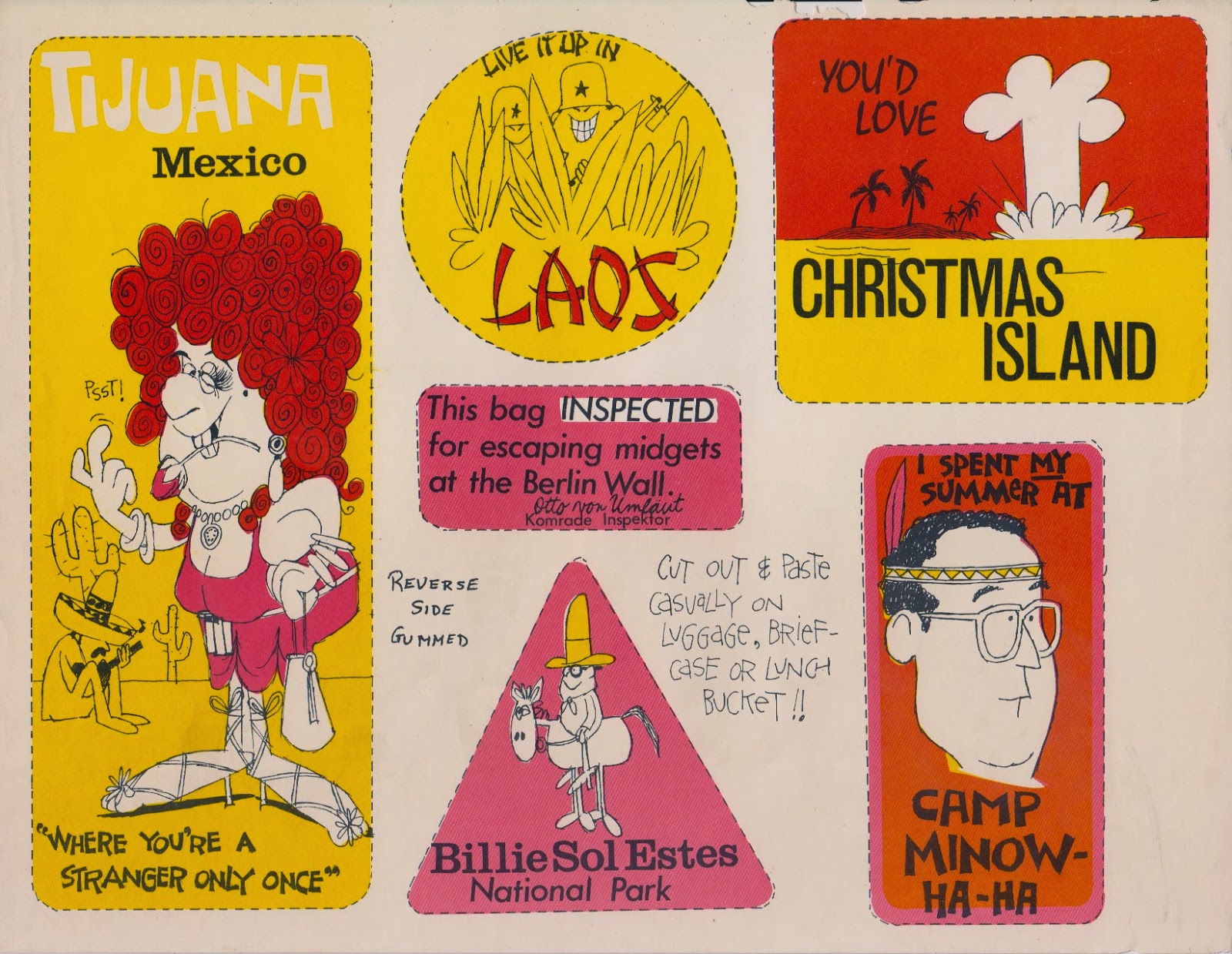 Context for some of the above stickers: Billie Sol Estes was a Texas businessman jailed for state and federal charges of fraud, Newton Minow was Chairman of the FCC and famously derided television as a "vast wasteland."  Supposedly, the SS Minnow on Gilligan's Island was named as a sarcastic shot at him.

Next up, Jay Ward tries to add another state to the Union...