Life at the Jay Ward studio, as seen by Bill Scott, part 1

With the benefit of hindsight, it is easy to view the Ward studio as an animation success story, of the little studio that came from nowhere and succeeded, almost as if it were preordained.  But appearances can be deceiving and after all my interviews, research and combing through file after ancient file, the most revealing insight to the history of the Jay Ward studio came from a sheaf of gag cartoons drawn on legal pads and animation paper by Bill Scott, the producer, head writer and voice of so many of Jay Ward's cartoon shows.

In those drawings were Scott's wry observations of life in a struggling animation studio; commentary on agency perfidy, holding onto talent, the frustrations of producing a show across cultural and linguistic barriers and even whether or not the studio would survive.   Those cartoons are unguarded moments, meant to be shared only with Jay Ward; none of those emotions ever surfaced in any interview I found.  Press interviews of the time were often filled with bravado, with Jay and Bill taking on either the ABC or NBC networks while later interviews, after success was achieved, seemed to focus primarily on the shows themselves.

For those who are new here or who haven't read my book, The Art of Jay Ward Productions, most of the animation on Rocky & His Friends and The Bullwinkle Show was produced by a studio in Mexico City inexperienced in TV series production and at a fraction of the cost of shows by competitor Hanna-Barbera.  It was a situation forced on Jay and Bill by the sponsor's agency, Dancer-Fitzgerald-Samples, and it was perpetual source of aggravation for them.

Although the duo had low expectations given all that they were saddled with, even those expectations appeared to be overly optimistic.  Shows came back riddled with the kinds of errors that never should have left the production facility--characters missing body parts, painted the wrong color, walking on a ground plane different from the background, etc.  And then there was the matter of animation being executed by people who had never animated before.  Bill Scott, who had come up through the ranks of classic animation, was mortified by what he saw. 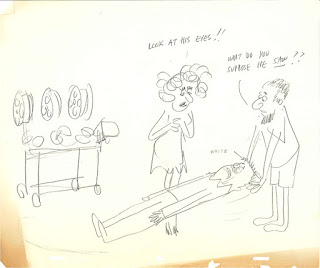 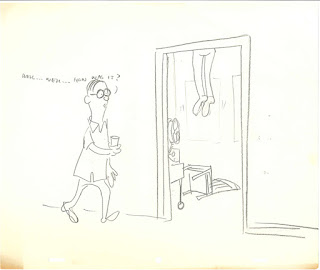 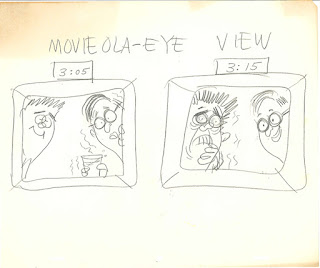 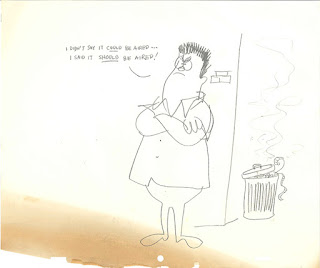 Next week, Bill Scott attempts to explain what happened behind the scenes at the Mexican studio.
Posted by Darrell at 9:30 AM No comments: