Jay Ward and Bill Scott sent out unusual Christmas cards and gifts to employees, freelancers and clients (see last year's post here) but perhaps the most unusual Christmas gift they ever gave was to director Ted Parmelee to commemorate his contributions to the success of the first year of Rocky and His Friends.  Since Bullwinkle the moose figured prominently in the series, the duo had delivered to Parmelee's home a full-sized stuffed moose head. 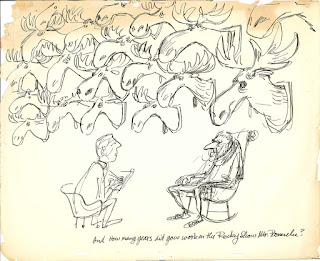 Parmelee responded by bombarding Ward and Scott with a series of over a dozen gag cartoons riffing on the gift.  The above cartoon was included in The Art of Jay Ward Productions but space and content considerations prohibited including any more.  So, because the moose head was a Christmas present and we're in the Christmas season, here are many of those cartoons revealing not only Parmelee's sense of humor about his gift but also his confident, calligraphic drawing style.  Incidentally, the stuffed head hung in the Parmelee household for years afterwards. 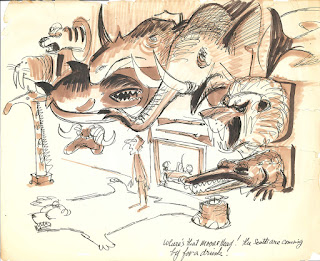 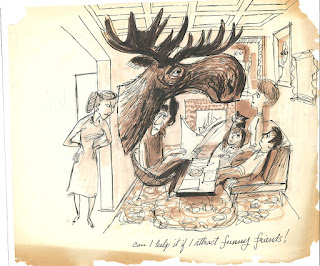 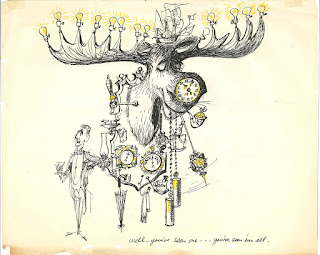 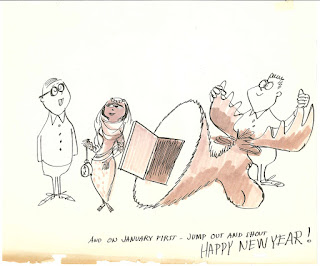 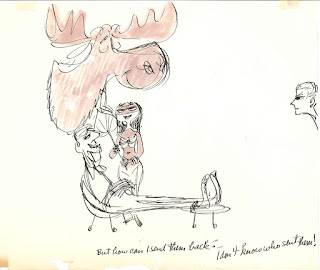 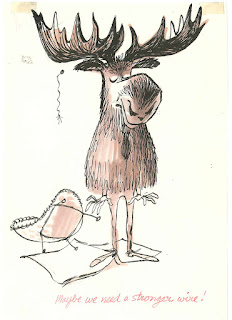 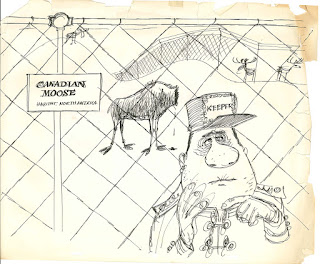 The real origin of Dudley Do-right

If you've read either Keith Scott's The Moose That Roared or my book, The Art of Jay Ward Productions, you know that the Dudley Do-right we're all familiar with didn't spring fully formed on The Bullwinkle Show but had his origins in 1948 when Jay Ward and Alex Anderson teamed up to produce the first nationally broadcast animated television series, Crusader Rabbit.  Crusader was only one of three proposed series, the other two being Hamhock Jones, a Sherlock Holmes parody, and Dudley Doright of the Mounties, a parody of  the Nelson Eddy/Jeanette McDonald filmed operetta, Rose-Marie, and classic melodramas.  Hamhock was destined to be a footnote in animation history but Jay Ward revived Dudley 13 years later with a tremendous assist from designer Al Shean and writers Chris Hayward and Lloyd Turner.

Ward and Anderson produced pilots for all three series, which consisted of Alex Anderson's drawings "animated" with camera movement on the still artwork and using a much slower narrator (Crusader Rabbit's Roy Whaley) than the later series.  The basic formula was established with the stereotypical melodramatic villain, here known as Sydney "The Snake" Snodgrass, the sweet heroine, Bess Blushmore, and the hero, Dudley Doright, a member of the Royal Canadian Mounted Police.  Only Dudley retained his name, the other two became Snidely Whiplash and Nell Fenwick.  The pilot was set in Deepfreeze Landing and the story unfolded in rhyme, as if from Robert W. Service's classic poem, "The Shooting of Dan McGrew."  Here, a very rare peak at some images from the lost Dudley Doright pilot:


The pilot was produced as a cliffhanger, leaving the ending up to potential sponsors of the show.  The real outcome wouldn't be revealed for 13 years, when Dudley ended up with his own series on 1961's The Bullwinkle Show, replacing Peabody's Improbable History.

To read more about Dudley's origin and how it came to be one of the best of all of Ward's shows, check out The Moose That Roared and/or The Art of Jay Ward Productions.  The latter can be purchased for half off Amazon's list price at artofjayward.com.

The Sweet Life of Jay Ward

For those of have been following my recent string of posts, you'll recall a series of insightful gag cartoons by Bill Scott recounting the trials and tribulations of the little studio that could, Jay Ward Productions.  The last of these posts are more personal; less about production and more about the two individuals helming the studio, Jay Ward and Bill Scott.

This week showcases Jay Ward's predilection for one of the finer things in life.  In a salute written by Bill Scott  for an ASIFA awards dinner that he was unable to present in person, Scott described one of his partner's primary weaknesses:

There is Jay Ward the eternal child, with a sweet tooth approximately the size of a mastodon tusk, who, when expanding his studio, made the first order of business, even before the desks were moved in, the installation of a complete soda fountain.  Ours is the only studio certified by the Pure Food and Drug Administration.

According to one of Jay's writers, Lloyd Turner, "We had a popcorn machine, an ice cream machine with tubs of every flavor plus two types of cone, and a Snow Cone machine with strawberry and cola flavors.  There were boxes of candy, hundreds of flavors of jelly beans, Kit Kats, Snickers bars and cases of real soft drink--not the diet stuff.  We'd all be drinking coffee at eight in the morning while Jay would have a breakfast of Coca-Cola and popcorn, or doughnuts.  God, his sweet tooth was legendary!" 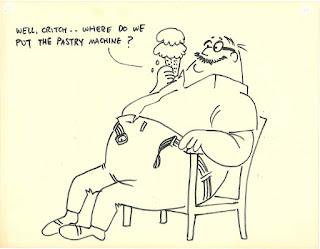 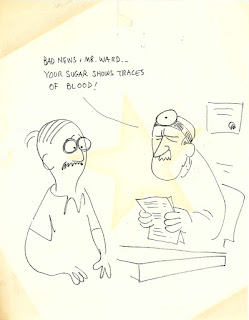 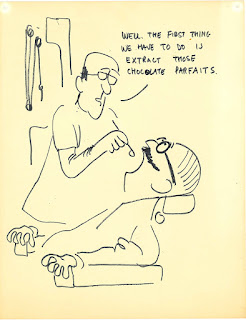 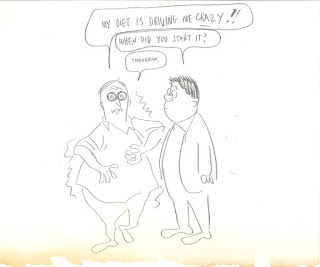 Thanks to Keith Scott and his book, The Moose That Roared, for the above quotations.