The central thesis for my book, The Art of Jay Ward Productions, was that there was a wide gulf between what we saw on the screen and what the artists actually created for production.  In some cases, that difference was due to execution, i.e. how the work was drawn or animated for production; in others, it was due to transmission--the lack of fidelity from the artwork to the viewer's experience on television, usually due to the quality of the existing prints.  And the existing prints, most of them decades old, are what have been transferred to DVD.  Sadly, the fact is there is no money to be made by going back to the original negatives for vintage TV cartoons, so  the best chance we have to view the artist's original intentions is to view the art itself.

In previous posts, Frank Hursh described what it was like to work at Gamma; this week I'm pleased to present a few samples of his work during that period.  The first thing Frank color keyed at the studio for others to paint was an early episode of Fractured Fairy Tales entitled "The Enchanted Fish." I've included frame captures from the current DVD transfers to illustrate the difference between what Frank painted and the images we've been seeing for over 50 years.  Certainly, some colors were altered as the backgrounds were painted but the murkiness of the current print affects the tone of the story: 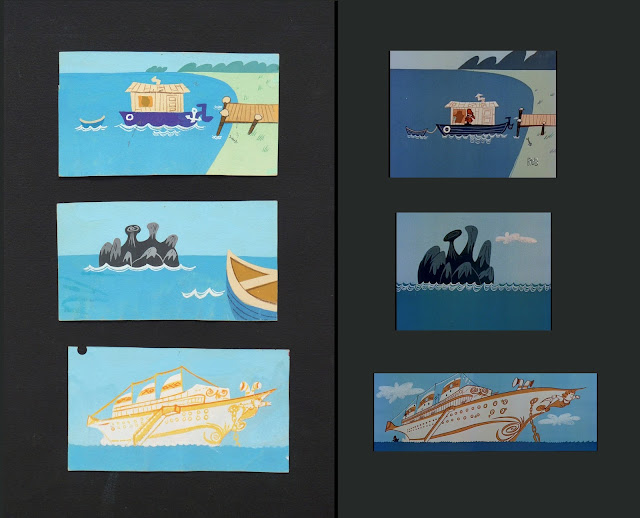 Below, some more color keys from the same episode, showing an even more radical difference: 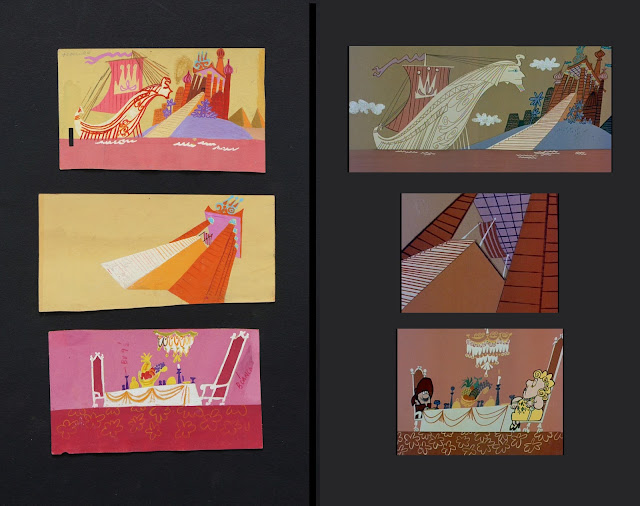 While the writing and voice work certainly carry the cartoon, imagine what a different experience the viewer would have with the vibrant art direction evident in these color keys!  What other treasures might be buried on the original negatives?
Posted by Darrell at 10:00 AM